One of the Boys

You’ve heard me lament about my accidental hobby, moving. Now here’s a fast fact about all those moves: 8 out of my 10 total roommates have been guys.

This is old news to me; when my brother and I were at my dad’s house, it was just the two guys and me. My brother and my dad enjoy eating lots and lots of Domino’s Pizza, microwave taquitos and Kraft Dinner. Sometimes they’ll have a fruit smoothie… but only if there’s protein powder in it. Dad always made sure there was healthy stuff in the house, but as we grew older I was the only one eating it.

My roomie situation was never premeditated; my roommate in second year (girl!) transfered to UBC, break-ups, co-op jobs and exchange left me scrambling after the housing situation reshuffled time and again. Now, I live with four boys. I’ve been extremely lucky that all of the guys I’ve lived with 1) have been really excellent people 2) were never ever creepy and 3) could tolerate my high-maintenance female behavior enough that we’re still good friends… with the exception of that ex-boyfriend I don’t talk to anymore.

I was doing laundry the other day, and I stepped out for a few minutes to pick up some groceries. When I got back, my towels were folded on the dryer. I thanked my roommate for being nice enough to fold them, and he shrugged and said, “Oh, your other stuff is in the dryer.” My other stuff being the load of delicate knits and silky blouses that were to be air dried (no articles of clothing were ruined in the making of this blog post).

One of my old roommates was a surfer. It seemed every time I cleaned the bathtub, he would be waiting in the hall with his wetsuit in a giant tupperware, heading to the very same tub I had just cleaned to soak the salt, dirt and general ocean debris out of it. Without fail, cleaning product still in my rubber gloved hands, he would smile innocently and say, “Oops. Sorry Eden…” 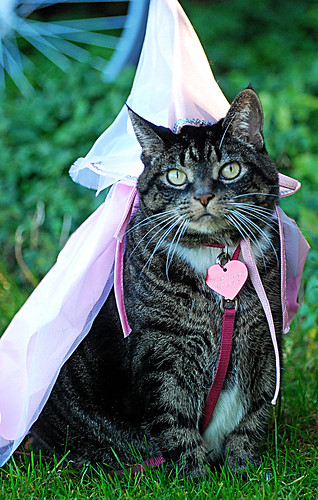 I guess I’ve traded Martha Stewart approved decor (the giant Canadian and Swedish flags in the living room were not my idea) for the reassuranceÂ that four guys wielding hockey sticks/golf clubs/squash rackets will be around to chase badguys away. Not to say that I don’t wield a mean hockey stick, because I do (I even played in the Wolf Cup last year, but I digress). And the good news is I don’t have to write my name on any of the food in the fridge – I don’t think they’ll be stealing my soygurt anytime soon.

Are you a lady in an all-boy house? Or a man in an all-girl house? Do you have tall tales of survival? Reasons why you love it?

My number one tip to the ladies: if you find yourself in a situation like mine, roll with it. Get in on the jokes, toss a few pranks their way and don’t be a princess. You’re one of the boys now.

2 Responses to “One of the Boys”

Tweets that mention One of the Boys | UsedEverywhere -- Topsy.com
February 2, 2011

[…] This post was mentioned on Twitter by Craig Vanderlinden, UsedEverywhere. UsedEverywhere said: One of the Boys… with a sense of humour http://ow.ly/3P16v #usedblog #roommates ^ED […]