“Oh, sorry. Are you totally bored because you’re not a hockey fan?”

I generally scoff at this question, often prompting the (typically male) inquisitor to blush and babble and mutter something about not looking like a hockey fan or some other silly excuse. Don’t get me wrong, I didn’t put effort into learning about it and I don’t attempt to participate in heated discussions that occur during the playoffs. I’m not a fan that only emerges in the season’s end – complete with Facebook status and profile picture updates and brand-spanking-new jerseys with the name of whichever player I happen to think is cutest.

My relationship with hockey began at a very young age, watching my dad play in various gentlemen’s leagues in my hometown of Halifax and then attending games more frequently after we moved to Vancouver. I’ve easily spent just as many evenings in 8-Rinks or Ice Sports North watching Duffers Hockey League as I spent mornings at the Riley Park Figure Skating Club. Living in a household with a single Dad fostered an accumulated knowledge of the sport (and many other sports, if I’m being honest) merely from being young and sponge-like and absorbing names, numbers, team and trades. I never knew when the games were going to be on, I’d just come home to find them present, volume cranked up high, on TV. Our dining room doubled as a locker room, the living room was the arena. 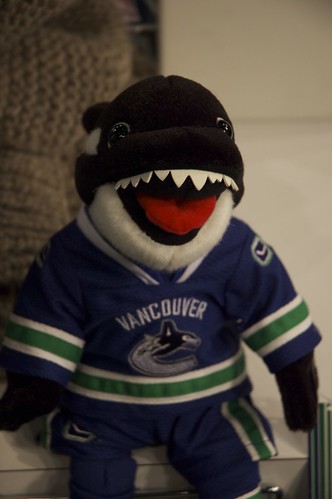 Sure, I find it a little silly when many of my female counterparts attempt to impress whichever guy they happen to be hunting at the moment with quips about the Sedins or Kesler or the player du jour. It really makes no difference: the games will all end eventually and their inability to define ‘offside’ will remain unchanged. I sit and watch and enjoy the games, often displaying my inheritance of dear old Dad’s ability to direct players through glass and wires, or in complete silence merely absorbing the plays.

One Response to “Lord Stanley’s Mug”

[…] day I was born, since I happen to have been born on my dad’s 29th birthday. As I’ve described previously, my relationship with my dear old dad tends to revolve around our birthday and two more things: […]