I was in Vancouver recently, and since my mom is a flight attendant for an un-named airline, I fly instead of taking the ferry (I’m about to lose that privilege however because of my age. Thanks, un-named airline). Thing is, I really don’t like to fly.

This flight was easily the most turbulent flight of my life, and as someone who spent her entire adolescence shuttling between yvr and yyc, I know a thing or two about turbulence. It was so bad that the woman behind me was literally sobbing and whimpering. Gimme a break. I don’t think anyone likes being in a tin can at 30,000 feet, hold it together and grip your armrests with clammy palms like the rest of us.

I always seem to be “randomly” chosen for a pat down or body scan (you get the choice now, so thoughtful!) when I pass through security. I guess I don’t look like I’m going to lose it on someone if they open up my bag and my meticulously arranged books/magazines/100 mL containers in Ziploc baggies explode onto the conveyor belt. Anywho, I opted for the body scan, wondering what all of the outrage was about when the technology was introduced. They can see the outline of your body? Oh the humanity!!

Since I was traveling on employee passes, I was standby. The 4pm flight got cancelled, the 4:30pm was full as a result, and so was the 5pm; three flights missed. The agent at customer service was kind enough to say, “Oh it’s too bad you weren’t listed on the 5pm.” Sorry, what? I was sitting right there. She mumbled something about my name not being transfered over after I had asked for it to be. Sigh. The 6pm was full but the 7pm would be wide open… Cancelled.

I decided to go to catch the last ferry, so I asked for my bag to be pulled (it had stand-by tags) but they “didn’t know where it was.” Airport speak for it went without me. It was so nice of them to send it ahead; it just loves plane rides.

I’ve devised a system for long haul flights; it involves saline nasal spray (dry nose from recycled plane air), alternating drinking water and ginger ale, the oh-so-fetching combination of the eyemask (I’m one of those people) with the semi-circle neck pillow and zinc and vitamin C lozenges. I’m pretty much a professional at this point. 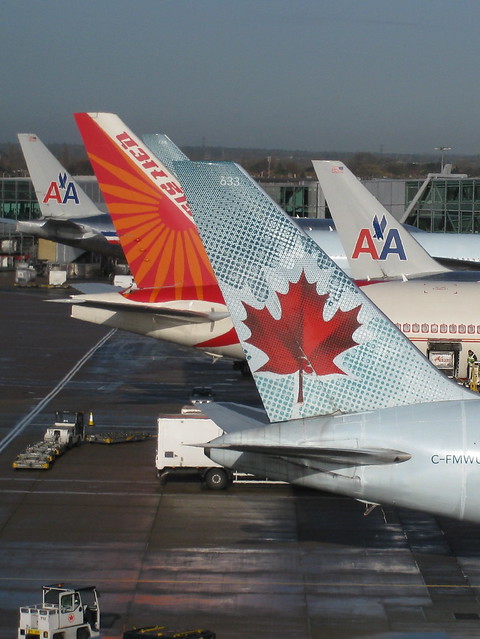 Why is flying so aggravating? I found this comic on The Oatmeal that sums everything up beautifully.

One Response to “Jet Set”

Oh I definitely know this feeling! On the way back from Montreal (YUL) in November, I got stuck in YYZ on the Sunday of reading break (always the busiest!).

Nine hours and 6 flights later, I made it back to YYC and then YYJ. Albeit, with a very sore behind and a 4-hour ride in 1 of 2 cockpit jump seats!