How to Make People Angry

There are two things that polite society teaches us not to talk about: Religion and Politics. You’re essentially guaranteed to stir some very strong feelings and find yourself squarely in a heated , ahem, discussion resulting invariably in awkwardness.

Uncomfortable as it is, there’s a Federal election coming up in Canada (May 2nd – get your vote on) and there are some controversial new bus ads making their way to select cities in BC dealing with religion… or lack thereof; is that in itself a religion? Oh, here we go…

Since the two topics go hand in hand, the timing of these ads is not exactly surprising particularly in Canada, a country whose cultural diversity cannot be separated from its religious diversity. These ads made waves in Toronto, where they were called “attack ads” for taking a swipe at opposing groups’ beliefs and not touting their own. Religion has been a hot topic since the days of Upper and Lower Canada, and one couldn’t expect that this issue will ever disappear.

Is religion fodder for bus campaigns and advertising? I don’t think so – I find it irritating and I would prefer to come to my own beliefs organically instead of having any group, whether pro or anti, attempt to stuff their beliefs down my throat or state their opinion on my beliefs. When you look at it though, it’s no different than advertising for pro-life or pro-choice, for example. Not to over-simplify anything, but I think it’s all part of the same argument when you get right down to it. Having said that, if we are going to advertise one side or another anyway, it should be fair game for all to participate. The onslaught that ensues? Well, you were warned. 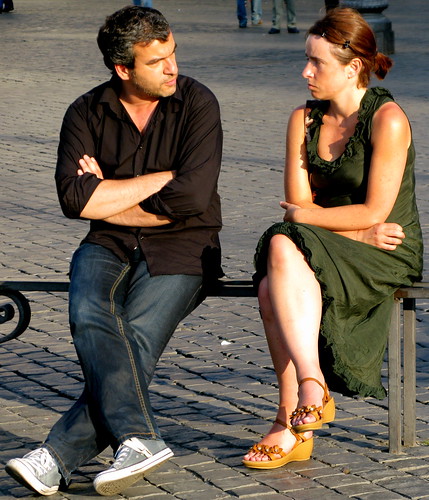 Looks like a “discussion” pertaining politics and/or religion may be taking place. creative commons image courtesy of Ed Yourdon

When the topic of the new bus ads was raised in the office, within moments there was a slew of opinions. Despite the variety of cultural and religious backgrounds and identities each of us has within the office, the discussion promptly took an inward turn. The halo in our company logo and the wings we frequently employ in promotional materials were scrutinized and questioned. Is it blasphemous to use this kind of religious symbolism? Or are we backhandedly supporting a particular religion? Very few religions actually use imagery of angels in their texts and traditions, but some do.

I personally didn’t even think of Christianity when I saw the logos for the first time. I can’t even remember what I did think, so it must not have been significant. Maybe I’m just not wired to jump to religious imagery, but it was kind of surprising to be forced to look at something I stare at every day, our company logo, in a brand new frame.

Do you think the issue of religion is not to be touched? Or is it all fair game in issues and discussions of beliefs, whether political or religious.

4 Responses to “How to Make People Angry”

i’m agnostic personally. i’ve been to church. if there is a god, he should learn to be a bit more frugal. i won’t carry on too much but i’m sure most of you know pope benedict was a nazi. the jist of what i wanted to say was that i’d sooner burn in hell for all eternity than live under a harper majority for one second.

I don’t think it matters one way or the other….religion is for fools, and even more so anyone who would argue about a talking snake in a mythical garden being the first-fruits of humanity….It wouldn’t be effective brain-washing if one would easily sway from it…..