I’ve been pretty preoccupied lately. I feel like my blog posts keep getting shorter while somehow managing to take up more effort. Why? How? Woe is me, perhaps?

Well, no. I’ve got it pretty made, if I do say so myself. A fantastic summer it has been, and although it may seem like it’s only just begun, for me it seems the end is near… In a melodramatic way, of course. With four weeks left in my undergrad degree, this delightful job with a most delightful company and a Grad Gala to plan (and a Grad Committee to wrangle, as of late), it’s been busy to say the least.

I’m hoping to end my reign as ‘the prodigal granddaughter’ when I toss that grad cap in November. It turns out they like to make you do many things in a short period of time in your last semester. Unexpected, isn’t it? And I do feel bad for missing my Grandparents’ 50th wedding anniversary this weekend. I know they understand, but it’s things like that you don’t want to have to miss. Especially not for something like school. Terrible timing, really. 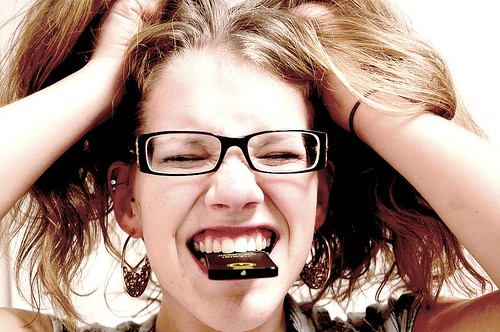 So as I said, I’m a little preoccupied. Don’t worry, it’ll pass. It’s just particularly bothersome when it comes to content creation. I regret to be pulling the ‘write about how you don’t know what to write about.’

How do you deal when your mind is elsewhere?

One Response to “How Frustrating Indeed”

fake it until you make it comes to mind! 🙂