A Story About a Dad on the Sidelines

I’ll admit it, I’ve been Daddy’s Little Girl since the day I was born. Literally the day I was born, since I happen to have been born on my dad’s 29th birthday. As I’ve described previously, my relationship with my dear old dad tends to revolve around our birthday and two more things: Business and Sports. If I’m being honest, it’s mostly sports.

Besides teaching me how to skate at age five and launching my fun but lack-lustre figure skating career, my dad was there when I traded in my toe-picks for a sport that has stuck with me ever since: soccer. Growing up in BC, everyone plays. It seems like everyone also starts playing around age six, so when I decided to break into the game at nearly 14 years old, there were some hurdles. I was in pretty decent shape and I found myself with some natural ability, but that was only going to take me so far. Overly-competitive as I am, this simply would not do. My dad had quit playing soccer at age 12, but was a competitive rugby player for most of his life. If there was one thing he knew how to do, it was kick a ball. 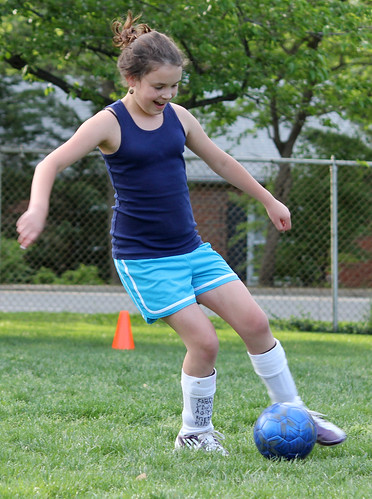 And so it began, many evenings, weekends and summer days spent on grass fields, gravel fields and turf fields working away, just me and my dad. And lo and behold, I got pretty good. I did it quickly too, and people noticed. I only ever got cut from one team I tried out for. I tried out for probably eight, nine or ten teams. When I had a disappointing season in high school, I came back and played for the same coach a year later. At the end of season team dinner, he gave me the award for most improved player, citing that he barely recognized me when I stepped back on the field after only 12 months.

I definitely had some off games, I made some mistakes. One coach decided to play me as a sweeper for one game and after four goals I stormed off the field. I was done for the day in my mind, but dad told me to get over myself and go back out. Sounds a little harsh, but he taught me that letting fear take over and self-actualizing on your moments of low confidence can ruin you.

I’ve been out of the house for four years now; still playing soccer, still working to get better, still hearing his voice in my head. He’s not on the sidelines too often these days, but he gave me the foundation to play a sport I love. I know he’s still proud.

Happy Father’s Day to you and your dad!

PS. If you still need a gift, KB has some fun suggestions!

2 Responses to “A Story About a Dad on the Sidelines”

When I was growing up my Dad was a long haul semi-truck driver. On occasion I had the luxury of hitting the road in his 18 wheeler. We pounded the pavement all over North America. One of my fondest memories was when I taught my Dad that the small stone sculptures that resembled people were called inuksuit and came from the heritage of the Inuit people. My Dad has never let me forget that, buying me a medallion inscribed with an image of an inuksuk and the saying, “The difference you make today counts in all of our tomorrows.”
Thanks Dad, I will never forget that powerful saying and the difference that our relationship has had in my life.
Happy Fathers Day to all Dads.

[…] Used Blog had its fair share of excitement as well, with lots of great posts like this one about Father’s Day, this one for deodorizing used furniture, and this story about a cherished […]