Where to find free moving boxes 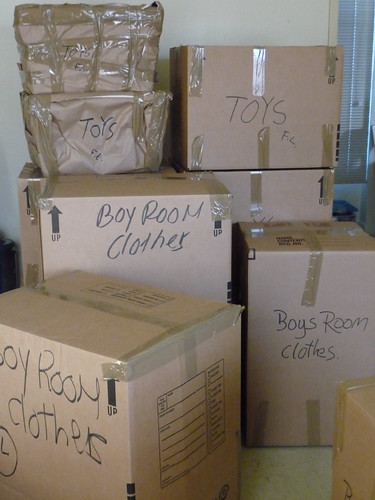 We’re getting ready to move out of our house in the Spring. We’re prepping for a massive renovation and need to get most of our stuff out of here. But first we want to spend some time going through our things and paring them down. For this we need cardboard moving boxes. LOTS of cardboard moving boxes. The question is, where can we pick some up for cheap, and preferably free here in Ottawa?

I put the question out to my friends on Twitter, and they totally came through. They came up with a lot of great suggestions including checking the local grocery stores such as Food Basics and the LCBO. Photocopy paper boxes make good ones too (I hadn’t thought of that)! FrogBox was also suggested to us, and I like the idea but it’s not cost efficient over the 6-8 months. But then someone suggested I check UsedOttawa (doh) and I did. And you know what? I found someone who was getting rid of 40 new moving boxes. And right after that someone on Twitter offered her moving boxes as well. It took about 10 minutes to find more moving boxes than I will ever need.

7 Responses to “Where to find free moving boxes”

my roomate grabbed all the ones she needed from McDonald’s. They ship their giant bags of pre-cut fries in perfect sized boxes and usually have a bunch lying around at any given time. They’re only too happy to give them away.

I never thought of that. Thank you!

I’ll be sure to set aside the boxes that DD packed for our move tomorrow. She would pack them, then decorate them with swirls and peace symbols 🙂

Great points you share on this blog for easy moving. The color code is beneficial, it shows us the exact identity of which of the boxes in the box. All points are helpful. I am using your points for while moving. Thanks!

Thank you for the helpful information! I would also recommend checking BoxGiver.com for free moving boxes.

Good day, Andrea Tomkins! Your extremely comprehensive article has given me a lot of useful ideas for adjusting to my new surroundings. However, relocating or selling a home is a difficult undertaking. Your article gives me a practical example of this and ensures that I can swiftly investigate your suggestions. Please keep up the good work and share more.