Skiing on the cheap

I’ve often said that in order to survive an Ottawa winter you should be prepared to get outside and make the best of it otherwise it will seem like the longest and coldest six months of your entire life.

One of the things that makes winter go by a little faster for us is cross-country skiing.

Skiing can be one of those pursuits that can be incredibly expensive (designer duds, top-of-the-line gear, ski passes and/or lift tickets) but it can be done totally on the cheap as well.

My husband and I already have the gear (albeit my snowpants are from the early 90’s… much to the horror of my tween daughters), so all we need to do is worry about getting the kids outfitted. Last year we discovered that Trailhead offers seasonal rentals of ski packages, which we decided to do since our kids are still growing. It is a bit of a gamble because skiing is so weather dependent. It can be a snow-heavy winter or not. The conditions can be downright Arctic-like, or not. You can be a motivated skier, or not. But we did it and it turned out to be a good deal that year.

This time around, because the snow didn’t hit until late in the season, we decided that we’d opt for weekend rentals instead. We picked up the skis last Friday afternoon and went out on Saturday and Sunday. This option only cost $25 per kid, and that’s because they’re into adult sized boots. It’s even cheaper for really little kids.

We debated whether or not to check out the trails in Gatineau, but since our goal was to ski as cheaply as humanly possible (you have to buy a pass in order to ski there) we decided to hit the Trail 26 at Stony Swamp on Saturday and Shirley’s Bay on Sunday. Both were free, and both were amazing trails for novices like ourselves. In fact, I’d say that Shirley’s Bay was a notch more interesting, what with the view of the water and the ice fishing huts. It was incredibly pretty and peaceful. 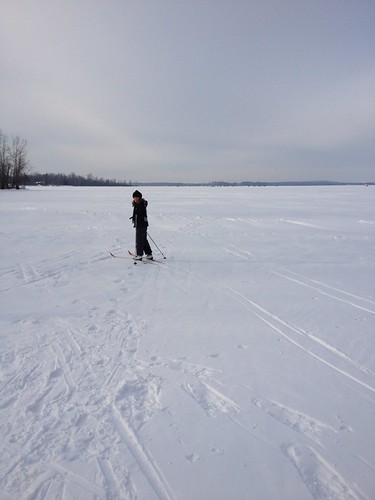 Skiing out on to the water at Shirley's Bay

It’s a 4 km loop that we managed to do in less than an hour, and cuts though a variety of interesting landscapes.

Skiing is a great way to spend time as a family. Not only is it great exercise, but it tires the kids out and practically guarantees a good night’s sleep for all.

Looking for cheap skis for keeps? I recommend checking out the skiing category of one of our Used sites right now. There’s a lot of great gear to be found there, not just for cross-country but for downhill too.

One Response to “Skiing on the cheap”

Looks like some good deals on x-country skis in Ottawa on UsedOttawa, I would be more apt to buy stuff rather than rent because might be able to get used gear for close to the cost of a year’s rentals.