Not your everyday kind of baking

Remember our Giant List O’Summer Fun? Well, we’re halfway though August and we’re starting to run out of ideas.  I’m starting to feel THE PANIC. And when I start to feel THE PANIC, desperation mode kicks in. And when desperation mode kicks in, well, watch out, because mummy’s got an eye spasm and has a tendency to burst into tears at any given moment.

All kidding aside, my tween daughters had two friends over the other day and my eye was starting to twitch. I had deadlines to meet and they were all underfoot. So I did the only thing I could do … send them outside to make mud pies.

This is what they came up with: 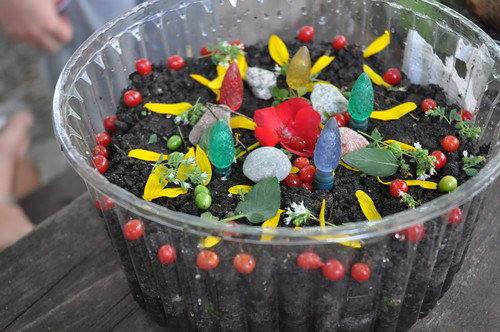 Yes, those are Christmas lights. A few years ago some squirrels chewed up a string of Christmas lights and we are STILL finding plastic bulbs all over the yard. They turn up everywhere! And in case you’re wondering about those red berries… just so you know, the girls are under strict orders never to eat anything they don’t recognize.

The second pie has a hidden secret: 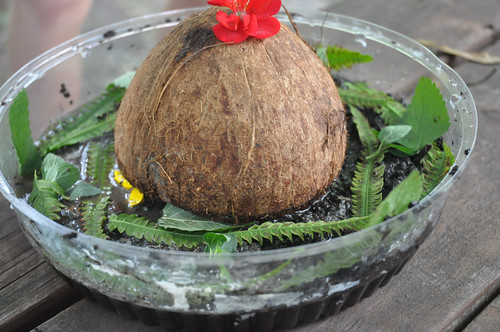 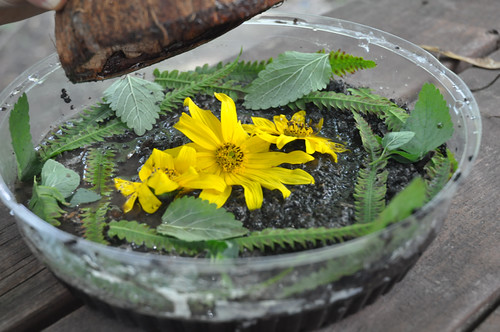 It might seem odd that we have a coconut shell in our backyard. They must have grabbed it from the compost heap. But aren’t the pies pretty? The four girls worked on their pies for about an hour … that’s sixty (60!) minutes of near silence in which I was able to work without interruption. Bliss.

I think those mud pies are worth their weight in gold. What’s more, my eye twitch is gone! For now.

2 Responses to “Not your everyday kind of baking”

[…] a bit of a show and tell at the UsedEverywhere blog this week. Check out our mud pies! You won’t believe what ingredients our kids managed to scrounge up for them […]

[…] I had alluded to in last week’s post over at the UsedEverywhere blog, we’ve had to look a little harder for Things To Do around here at Casa Fishbowl. But when I […]