The other day I was rummaging around a big storage container in the garage and I came upon our old ant farm. Did you ever have one of these things? 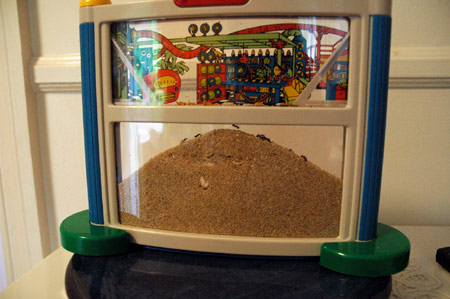 We tried “farming” ants a few times and never had much luck. To summarize, we are ant killers. End of story.

Captive ants are notoriously hard to keep alive. Or maybe it’s just me? 🙂

The setting up an ant farm requires some finesse. You pour the sand mixture from a tiny bag into a tiny slot, moisten it with a few drops of water, and poke some tiny wads of cotton down in there with a wooden skewer (not included).

Then you have to catch some ants.

Ant catching is surprisingly harder than you’d think. First of all, they bite, which is why I made my husband do it. We’d position ourselves beside an ant hill in our back yard. He’d grab one (grabbing sans squashing is a real art) while the rest would run screaming and scatter in multiple directions. (Naturally.)

I’m sure we traumatized several generations of ants. In fact, I bet we probably figure quite prominently in annals of ant history, passed down from larvae to larvae. We defined The Terrible Year of ’06… the year Large Humans Poked Around and Destroyed Towers 5a Though 11d and Squashed Harold, RIP.

With some ant farm kits you can actually order the ants from the manufacturer, but we were impatient and decided to make do with the garden variety. Maybe this was a mistake.

We always managed to catch about ten ants to transfer into the farm. We liked to watch them excavate; working with planning and determination, carrying one grain of sand at a time here or there according to some invisible blueprint. Every once in awhile (as per instructions) we’d drop a crumb of food into the ant farm and see what they did with it.

BUT, regardless of the amount of care and feeding and time we spent with our adopted “pets,” our colony always ended up with many many casualties.

They’d eventually become lethargic (maybe depressed?), and would lose interest in tunnel excavation. I’d watch them. After awhile their time was spent in what appeared to be deep discussion… huddled in small groups, waving their antenna. Were they on strike? Questioning the futility of their work? Maybe some of them figured out there was no Queen around so they thought they could slack off on the job.

By the end of our experiments I often found myself releasing the survivors into the wilds of our garden, not because I have a soft spot for insects, but because it was just too damn depressing to watch the population collapse.

It was odd. When one of the ants died, all the other POWs would huddle around it. But I couldn’t ever tell if they were in deep mourning or just picking at the carcass.

Material goods such as the bits of apple and damp cornflakes didn’t make their lives any better.

Watching them die off one by one was not fun. I remember taking the ant farm outside one time and popping the top off. We watched closely to see what would happen. One of the ants rushed for the exit, sniffed his surroundings, and then went back down into the depths of the ant farm. Antenna waving, he made the rounds to the other ants. The girls and I imagined what he was saying;

“No need to lose our heads here boys,” he barked. “There’s a way out! Let’s be orderly about it and don’t forget to bring the… DAMMIT JIMMY WILL YOU STOP EATING FRANKO AND LISTEN TO ME. I’M TALKING ABOUT OUR FREEDOM HERE!”

The next morning they were all gone, except for one sad little thing that hovered near the bodies. Was it a funeral or a buffet? I’m still not sure.

Since then the ant farm (a.k.a the ant morgue) has remained untouched. Maybe you’ve had more success with yours? Maybe your ants were tougher than mine? Let me know!

3 Responses to “Our (Orwellian) ant farm”

[…] My family and I murder ants over at the UsedEverywhere blog today. […]

This Ad was quite funny, rather Dave Barry-esque. Bravo!